Germany’s largest car company Volkswagen has confirmed entering a discussion with the Federation of German Consumer Organisations or Verbraucherzentrale Bundesverband (VZBV) for possible settlement over the issue on “dieselgate” emissions cheating.

Around 446,000 German diesel car owners have joined the class action lawsuit against Volkswagen after it allegedly mounted unlawful devices in its diesel cars for the manipulation of excessive emissions, thus, comply with the set guidelines during testing.

The “dieselgate scandal” broke in 2015, involving not only Volkswagen vehicles, but also its subsidiaries like Audi, Seat, and Skoda. About 11 million cars were installed with the “defeat device,” according to reports.

It was only last year when the German customers filed a lawsuit against the carmaker; four years after patiently waiting for their compensation that should be equivalent to the full purchase amounts of their vehicles.

Volkswagen said the talks between them and the motorists are currently in the early stages following the advice of the presiding judge from the Braunschweig Higher Regional Court who suggested about the “settlement discussion” in September 2019.

Apparently, both parties said that the settlement is not yet guaranteed but their common goal is to have “a pragmatic solution for the benefit of the customer.” They have also decided to keep the talks private.

Reports showed that Volkswagen has consumed around €30 billion for fines and other legal compensations since the scandal was revealed back in 2015. 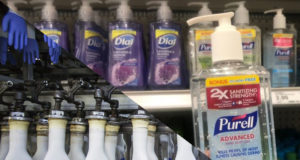 Merry Gel Sigui - February 22, 2020
0
Producers of disinfectants, hand sanitizers, and rubber gloves in Malaysia are struggling to provide global requests which have ballooned due to the...