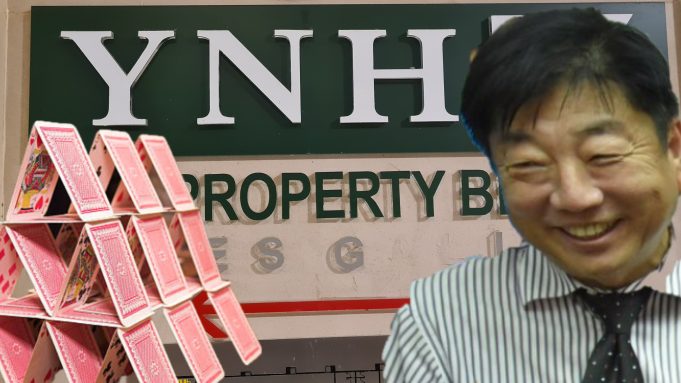 A clear picture of how the YU syndicate uses only its own groups of companies that is either owned or controlled by YU KUAN CHON and his brother YU KUAN HUAT with a number of posers to create imaginary business deals to gift billions of ringgit from investor and lenders to its own controlled SPV companies.

The YU Syndicate is able to deceive the auditors of both Ernst & Young in the early years and more recently Baker Tilly Monteiro Heng PLT. because the time scale used in these scams is at times longer than 10 years, well outside of the Auditor’s scope of work. Auditors take for granted previously completed audits and simply continue forward making it easy for the YU Syndicate to use deceptive practices.

In the early stage of these scams, the YU Syndicate will set up a Special Purpose Company (SPV) subsidiary company under one of the Public companies such as Rapid Synergy or YNH Property. These companies are shelf companies that have no assets. Most were set up by YNH’s own in-house Company Secretary (CHENG GHEE CHENG) and audited by LEE, YIP & ASSOCIATES PLT, a company owned by Lee Chun Weng, a long-time Director of RAPID SYNERGY BHD.

In the next step, the YU syndicate arranges for various land purchases by the SPV companies. Usually stating that the investments into this land are for its future land bank and paid for by lenders and shareholders. Announcements often paint an imaginary Gross Development Value(GPV) that will never happen.

Then the most important step, let time pass… 1 2 or even 10 years until they are ready for the next stage. Meanwhile, they build multiple SPVs as inventory just for this purpose and age them beyond the suspicion of Auditors and Shareholders.

The next stage is diversification; The YU Syndicate downplays the imaginary project with the GPV that was originally announced. They cook the books with a scheme that enables the sale of the SPV to a private company controlled by the YU Syndicate at a loss as some sort of acceptable return on investment for Shareholders.

Again, the YU Syndicate uses its valuable tool, time. They let some years pass by to allow history to be forgotten. The problem is, that with some digging, there are records of these actions in the public domain. So we can look it up. They wait until the history is no longer interesting to the Auditors and Shareholders.

Out of 5 properties purchased, 1 is eventually developed. But how it is developed is the interesting part and next step of this criminal enterprise. Once enough time has passed, the SPV controlled now by the YU syndicate goes back to make a Joint Venture (JV) with the public company once again.

In these Joint Ventures, YNH dumps RM Billions into interest-free, non-refundable, non-taxable deposits into the SPV companies in return for a minority percentage of the project. In the 2021 annual report of YNH, they list as assets more than 20 of these deposits totaling more than RM1 Billion in cash gifts paid to the SPV controlled by the YU Syndicate directed by the YU Brothers. It is a big question as to why non-recoverable deposits valued at more than RM1 billion are counted as assets.

It sounds confusing, but when you see the amount of Debt that is counterbalanced by these valueless assets on the balance sheet, you begin to see how they use this group of companies to extract untold sums of money away from the public and the taxman.

The entire public company operation is nothing more than a house of cards that at any moment can collapse rendering the shares and assets worthless. Shares are all pledged to Lenders for private loans, and the Assets are used as collateral to Bonds and lenders. All with no actual value compared to the lending secured by both

A real development company will go out and purchase land as is done by the SPV in the first step. Then over the appropriate time, this land will be developed in the normal course of business. The shareholders will equally benefit and the debts paid back.

There are no other plausible explanations for this transaction activity by the YU syndicate but to defraud the minority shareholders and Lenders. There is only one way this ends. An exit strategy executed by the YU Syndicate where the house of cards collapses leaving the Lenders and shareholders holding the bag.

This is part 5 of a 5-part exposé our team has worked on in relation to the YU Syndicate and its business dealings. Due to the overwhelming interest in the YU Syndicate, we are extending our coverage and will continue to report on this criminal enterprise.

Information used in this story has been obtained primarily from public and corporate records along with inside confidential sources close to the matter. This investigation is ongoing, and the facts and data will lead us to the truth. Stay tuned for more to come in the following weeks.

If you have information about the YU Syndicate, YHN, RAPID, or other related parties mentioned in this article, feel free to send us an email. If you are concerned about privacy, please use a new email account dedicated solely to this purpose. Contact us via the contact us links or by email. We welcome public assistance and will go to great lengths to protect our sources.

Merry Gel Sigui - January 12, 2020
0
The Prime Ministers of Canada, United Kingdom and Australia have similarly affirmed that an Iranian surface-to-air missile shot down the Ukrainian jetliner...