As the World Bank warns a ‘global wave of debt,’ its President, David Malpass stressed that “debt management and transparency need to be top priorities for policymakers—so they can increase growth and investment and ensure that the debt they take on contributes to better development outcomes for the people.”

This after it was analyzed that the debt in emerging and developing economies (EMDEs) mounted to a total of US$55 trillion in 2018, making it as the fastest and largest accumulation in global debt for the past 50 years.

“The size, speed, and breadth of the latest debt wave should concern us all,” Malpass added.

In its comprehensive study dubbed ‘Global Waves of Debt,’ the World Bank has presented four major episodes of debt rise in hundreds of countries since 1970. This includes the financial crises in Latin America and Asia in the 1980s and on the late 1990s, respectively and the global fiscal crisis from 2007 to 2009.

“The debt-to-GDP ratio of developing countries has climbed 54 percentage points to 168 percent since the debt buildup began in 2010. On average, that ratio has risen by about seven percentage points a year—nearly three times as fast it did during the Latin America debt crisis of the 1970s,” the report stated.

Based on the findings, the latest wave of debt is entirely different, hence, more difficult to handle compared to the previous three waves as the recent encompasses the buildup of debt in both public and private, coupled with the new types of creditors in all regions across the globe.

World Bank urges policymakers to take prompt paces and develop mechanisms such as improving measures of tax collection and implementing stricter fiscal rules to facilitate debt resolution and prevent the occurrence of another financial crisis. 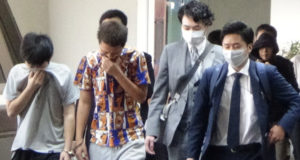 Merry Gel Sigui - February 26, 2020
0
Nine Japanese nationals who are wanted for telecommunications fraud were deported Monday by the Bureau of Immigration (BI) of the Philippines.