Athletes of different sports across the globe mourn the tragic death of NBA legend Kobe Bryant.

He and his daughter Gianna were among the nine people killed in a helicopter crash in Calabasas, California, on Sunday. Kobe was 41 while Gianna was 13.

Media reports said that basketball courts in Denver and San Antonio were haunted by a moment of silence upon confirming the sad news.

Denver held the game between Houston Rockets and the Nuggets. While San Antonio hosted the battle of Spurs and Toronto Raptors. Both teams were said to have taken 24-second shot-clock violations on their first possessions of the game in honor of Kobe, whose recent Jersey number is 24.

In an interview before a game in Orlando, Los Angeles Clippers’ coach Doc Rivers poured in tears as he remembers Kobe’s extraordinary work ethics.

“He was such a great opponent…It’s what you want in sports. He had that DNA that very few athletes can ever have…”

Other athletes and sports enthusiasts also mourned the loss and paid tribute on social media.

On Tweeter, NBA Commissioner Adam Silver issued a statement that says: “The NBA family is devastated by the tragic passing of Kobe Bryant and his daughter Gianna…We send our heartfelt condolences to his wife, Vanessa and their family, the Lakers organization, and the entire sports world.”

Former Spurs star Tony Parker also posted a tweet: “I’m heartbroken by this news, you were a true legend, and friend. Rest In Peace @kobebryant, my thoughts and prayers to his wife and kids. #legend #mamba #goat.”

“The world lost a legend today but the impact and legacy he leaves behind will last forever! #RIPMamba,” Pacquiao posted.

Major League Soccer also took to Twitter to express their sadness and condolences at the death of the Bryant’s and other passengers of the plane.

“We are devastated by this news, and extend our condolences to the Bryant family and the families and friends of everyone involved.”

Media reports also confirmed that Orange County’s Basketball coach Christina Mauser and Baseball coach John Altobelli, along with his wife Keri and daughter Alyssa were among the fatal victims in the plane accident. 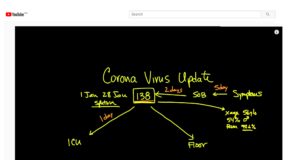 Merry Gel Sigui - February 12, 2020
0
At least 1,016 people in mainland China were reportedly killed by the novel coronavirus as of February 11. The figures clearly show...