BARDUFOSS, Norway: NATO must face a Russian adversary that is more unpredictable and ready to take greater risks to project power in Europe. A U.S. general said on Wednesday, warning that studying Russian capabilities and military doctrine was no longer enough.

Russia’s invasion of Ukraine, which Moscow launched on Feb. 24 and calls a “special military operation”, has jolted analysts’ assumptions. That Russian President Vladimir Putin would always take calibrated risks, use limited ground forces and find diplomatic exit strategies. As he did in his 2014 annexation of Crimea and his intervention in Syria in 2015.

“We have a clear understanding of what their capabilities are. And we’ve studied their doctrine for a long time,” said U.S. General David Berger during NATO exercises in Norway.

“Their decision-making on the part of the president, that’s another factor. Whether or not they would do something,” Berger, who is the commandant of the U.S. Marines Corps, told reporters from the snow-covered Norwegian airbase of Bardufoss.

“I think the lesson learned here is you can’t predict what a dictator might do,” he said of Putin. Who the West says has become increasingly authoritarian, crushing dissent at home.
Berger said that meant NATO exercises, such as the “Cold Response” drills underway in northern Norway this month, are crucial to prepare allied forces on the land, sea, and in the air, and at a moment’s notice.

“You have to be ready to respond,” Berger said.
NATO leaders meeting in Brussels on Wednesday are expected to agree to increase the frequency of such military drills. As part of the alliance’s response to Russia’s invasion of Ukraine.

The scenario for the “Cold Response” NATO exercise in the Arctic circle has been similar for years. Norway is attacked by a fictional country, triggering the alliance’s collective defense clause. Leading to troops from the United States, allies, and partners coming to its aid.

But this year, the biennial exercise has taken on an added significance for some of the roughly 30,000 troops. Including 3,000 U.S. Marines, taking part in it because of the invasion of Ukraine.

For some privates, Ukraine’s resistance serves as an inspiration.
“If Russia came, we should have the courage. We will fight for ourselves,” said 20-year-old Norwegian private Leo Ryan. Standing in white fatigues in deep snow and freezing rain. Another private, Filip Buyle, said that he saw Russian soldiers, conversely, lacking the will to fight.

While there are no signs that Russia is looking at making military moves on Norway. The fictional enemy in the “Cold Response” exercise shows what a future conflict in the Arctic region could look like. Fought near where the borders of Norway and Russia meet.

In the exercise, the U.S. Marines are making amphibious landings in Norway. The airspace over the country is contested. And the painstaking effort is taken to consider the logistics of bringing troops to the country and resupplying them. 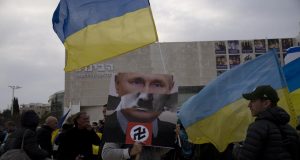 Zelenskyy evokes Holocaust as he appeals to Israel for aid.