GEORGETOWN, Guyana: Guyana’s government has granted permission for U.S. supermajor ExxonMobil to develop a fourth offshore oil and gas field. The company said it has made a final investment decision on the $10 billion projects. Aimed at producing up to 250,000 barrels per day.

Guyanese authorities announced the approval of the Yellowtail Project on Sunday. Adding to the company’s Liza One, Two, and Payara fields.

“Yellowtail’s development further demonstrates the successful partnership between ExxonMobil and Guyana. And helps provide the world with another reliable source of energy. To meet future demands and ensure a secure energy transition,” the company said in a statement. The new project is expected to come onstream by 2025.

It said that nearly two dozen successful oil wells since the first in 2015 allowed it to so far have access to more than 10 billion barrels of oil in the Guyana Basin.
The first barrel of oil was pumped offshore in December 2019. Making the country of about 800,000 people one of the world’s newest oil producers.

The approval comes in the midst of a debate between the company and several rights and environmental groups. As to whether adequate insurance is in place in the event of an oil spill. Such an event could affect neighboring continental and tourism-dependent Caribbean countries, devastating economies and marine life.

Former Guyanese environmental chief Vincent Adams said. That the company must be made to have adequate insurance and not allowed “to water down.” The language in legal documents is linked to the issue.

He said the environmental agency had agreed with Exxon during his time. As the country’s environmental administrator ensure that there was at least $2.5 billion in oil spill insurance coverage.

The company which controls the high-yielding Stabroek Block along with American-owned Hess Oil and the China National Offshore Oil Corp., says. It has at least $2 billion on standby in addition to the “financial capacity to meet our responsibilities for an adverse event.”

“We are committed to paying all legitimate costs in the unlikely event of an oil spill,” it said.

The company recently said that it is already preparing to apply for approval for a fifth oil field. And could be ready to submit final documents by the last quarter of this year.

The success of the Stabroek Block has pushed most of the world’s leading oil firms to buy into neighboring blocks or to apply for concessions near Exxon’s. The government has already said that it will auction off several remaining blocks by the end of this year. Including portions of unexplored areas by companies or those which have been given back to the state. Because no commercial quantities of oil and gas had been found. 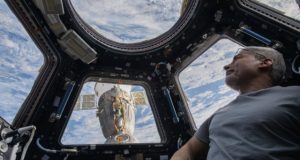 Ariel Antonio - April 3, 2022
0
MOSCOW: The head of Russia’s space program said that the future of the International Space Station hangs in the balance. After the...