A Former Microsoft Engineer named Volodymyr Kvashuk has been convicted of fraud that could put him in federal prison for up to 20 years.

The U.S. Department of Justice (DOJ) said that the conviction covers 18 federal felonies which include five (5) counts of wire fraud, six (6) counts of money laundering, two (2) counts each of aggravated identity theft and filing false tax returns, and one (1) count each of mail fraud, access device fraud, and access to a protected computer in furtherance of the fraud.

Kvashuk, a 25-year-old software developer, was employed by Microsoft in 2016 to test its online retail sales platform. But he apparently used this access to steal $10 million worth of digital currency from his own bosses.

Authorities said that Kvashuk started his scheme by thieving a small amount of $12,000 currency stored value (CSV) like digital gift cards that could be redeemed for Microsoft products and resold online. Then the amount later grew in millions of dollars and he even managed to illegally use his co-workers’ test email accounts to steal.

The Ukrainian native was only confronted and fired in 2018 when the “Microsoft’s Fraud Investigation Strike Team (FIST) found an unusual spike in Xbox subscriptions bought using the tech giant’s in-store credits,” according to media reports.

“In addition to stealing from Microsoft, Volodymyr Kvashuk also stole from the government by concealing his fraudulent income and filing false tax returns,” said Special Agent in Charge Ryan Korner of the US Internal Revenue Service Criminal Investigation.

Kvashuk denied all the accusations and contended that he was only working on a special project that would be beneficial to Microsoft. He added that he never had any intentions to defraud the multinational technology company.

He allegedly used most of the stolen proceeds to purchase a lakefront house and a Tesla unit which cost $1.6 million and $160,000, respectively. 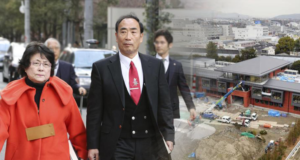 Japanese couple who operated an educational institution sentenced to prison for...

Merry Gel Sigui - February 23, 2020
0
Yasunori Kagoike, the former head of a Japanese institution named Moritomo Gakuen, and his wife, Junko, were found guilty of defrauding the...