The United States slammed China and Russia for blocking the condemnation of the recent attack on the American Embassy in Baghdad.

US officials were angered as China and Russia allegedly coordinated, through phone, to block a United Nations Security Council statement condemning the attempt to burn down the compound on December 31, with at least two rockets hitting near.

While the US applauded the 27 of the 193 member nations that censured the attack, it irately stressed that China and Russia’s actions have undermined the credibility of the entire UN Security Council.

“Indeed, not allowing the United Nations Security Council to issue the most basic of statements underscoring the inviolability of diplomatic and consular premises once again calls the Council’s credibility into question,” the U.S. mission to the UN said.

In response, both China and Russia denied the accusations raised by the US.

China’s UN ambassador Zhang Jun said: “China firmly supports the protection of the safety of foreign missions in accordance with international law. The US unilateral military action has led to drastic changes in (the) regional situation.”

Russian ambassador to the UN Vassily Nebenzia, for his part, said: “As a principle, we condemn strongly any attack on any embassy anywhere in the world.”

According to reports, the Baghdad embassy assault was initiated in objection of the US airstrike against Iranian-backed militia Ketaeb Hezbollah (KH). The US believed that the rocket attacks on its territories in northern Iraq were caused by KH.

President Donald Trump responded to the embassy attack by authorizing a drone strike in Baghdad that killed Iranian General Qasem Soleimani which further grow tensions between the US and Iran. 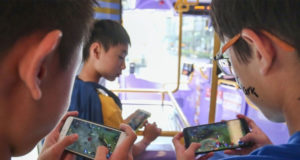 Merry Gel Sigui - March 6, 2020
0
The demand for mobile games has surged as millions of people in China are quarantined and stuck indoors amid fears of the...