Goods with ‘Made in Vietnam’ tags have become more popular in the United States as the world’s largest economy reduce its dependence on China’s supply chains.

Based on the data from the U.S. Census Bureau, America’s imports from Vietnam has recorded its highest increase in the previous year since 2003. The imports for 2019 amounted to a total of $67 billion which is equivalent to 36% rise.

The Southeast Asian nation is a major exporter of agricultural and electronic products to the U.S. It also supplies Americans with clothing, furniture and other goods.

“The United States has become far and away the most important driver of Vietnam’s export engine, accounting for two-thirds of Vietnam’s total export growth in 2019,” said Michael Ryan, the director of economics at IHS Markit Economics.

He added that Vietnam is making a “massive reorientation” in trade toward the U.S. market. The increase in exports also show that Vietnam is one the largest beneficiaries of the trade war between the U.S. and China.

While Vietnam’s exports increased in 2019, the U.S. imports from mainland China dropped more than 13% during the same year.

Several companies worldwide are now moving to Vietnam due to higher costs of exports and other factors that hurdle trading with China.

“The trade war did not get companies to move to the United States. Instead, it caused many to move to other nations, like Vietnam,” said Jing Wu, a business professor in Hong Kong interviewed by the Voice of America.

Experts say that Vietnam has also seen an increase in direct investments from foreign manufacturers as a result of the imposition of elevated tariffs in major economies. 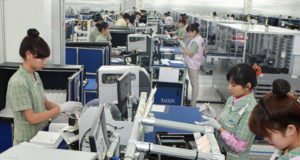 Merry Gel Sigui - April 3, 2020
0
A survey conducted by Japanese news agency NNA showed that two-thirds of the country’s firms that operate businesses in the Philippines, Indonesia,...