The United Nations’ International Labor Organization (ILO) said it is really worried about the lack of decent jobs of nearly half a billion people in the whole world.

In their annual World Employment and Social Outlook report, ILO said that the number of registered unemployed individuals is expected to rise to 190.5 million this year from only 188 million in 2019.

While 285 million people will be listed under the category ‘unemployment’ which occurs when the workers’ jobs don’t require all their skills, education, or availability to perform duties.

“I think that this is an extremely worrying finding…The situation is worse than we previously thought,” ILO chief Guy Ryder said in an interview.

ILO asserted that this could have been a result of the reduction in the number of opportunities in the labor market as some economies face slow down.

China, for instance, earlier said that its unemployment rate is likely to soar as the country is tangled with rising debt. However, the Chinese government committed that they will do all the necessary measures to avoid mass layoffs and protect their economy.

The ILO chief continued that the lack of access to decent work seemed to contribute to social unrest that caused mass demonstrations in different countries like Chile and Lebanon.

“Labor market conditions are contributing to… this erosion of social cohesion in many of our societies,” Ryder added.

The “social unrest index” of ILO showed that in the recently concluded decade, there was an increase in the occurrence of anti-government protests and strikes in most sub-regions and at the global level.

In 2019, more than 630 million people fell under working poverty or the circumstance where families, with at least one member in paid work, receive a wage that keeps them beneath a formally perceived poverty line. 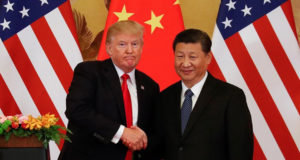 US and China vowed to resolve economic disputes through comprehensive dialogue

Merry Gel Sigui - January 13, 2020
0
Apart from inking the Phase 1 trade deal between the United States and China on January 15, the two nations have also...