From merely catching up with the United States in the past, President Vladimir Putin of Russia claims that their country is now the world leader on hypersonic weapons citing their unique advances.

Putin boasted during a Defense Ministry board meeting that Russia, for the first time, has a strong edge in developing an innovative class of weapons. Based on a transcript released by the Kremlin, the President said: “not a single country possesses hypersonic weapons, let alone continental-range hypersonic weapons.”

The president said that Kinzhal, a nuclear-capable air-launched ballistic missile, has entered service last year while the first unit of the Avanguard-equipped hypersonic glide vehicle is set to go on duty before this year ends.

Russian experts claim that the Kinzhal missile can hit both land targets and navy ships as it flies 10 times faster than the speed of sound, has a range of more than 2,000 kilometers (1,250 miles) and can carry a nuclear or a conventional warhead.

Describing the Avanguard prospective weapon, on the other hand, Putin said: “It’s a weapon of the future, capable of penetrating both existing and prospective missile defense systems” considering that it has a largescale range and can fly in the atmosphere at a speed 20 times the speed of sound.

Apparently, despite Russia’s showcase of numerous types of advanced weapons that are believed to surpass US and NATO defenses, experts still question the former’s military weapons as these remain unbacked.

Aside from Russia, China and the US are also working on hypersonic projects in recent years.

Previous reports said that Beijing has already tested a hypersonic aircraft, while the US Air Force has initiated the development of a missile by awarding a contract to Lockheed Martin— an American global aerospace, defense, security and advanced technologies company. 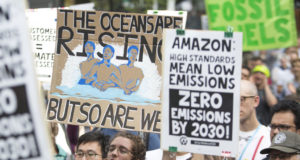 Amazon employees warned of being fired for speaking out environmental issues

Merry Gel Sigui - January 6, 2020
0
Multinational tech company Amazon allegedly threatened to fire some employees who spoke out negatively about its environmental policies. This...