The Philippines has recorded its deepest fall in shares as growing concerns over coronavirus hit Asian and global markets.

Based on reports, the Philippine Stock Exchange Index plunged 4.3 % on Wednesday trading, tumbling the most since January 2016.

The Bankers’ Association of the Philippines also said that the peso succumbed to the dollar, finishing at P50.92. It has weakened by 15.5 centavos from its P50.765 close on Tuesday.

China’s shutdown of factories and businesses have greatly contributed to turning Philippine trading screens on red.

Filipino fast-food giant Jollibee which operates branches in the mainland fell by 6.14%. It has earlier announced the temporary closure of more than 10 Yonghe King noodle stores in the virus-stricken province of Hubei.

Jollibee, owned by Chinese-Filipino Tan Caktiong, has merged with the Shanghai-based noodle restaurant back in 2004.

Bloomberg reported that the Philippines’ largest companies including San Miguel Corporation and Robinsons Land Corporation were down at least 6%.

Local carriers are also suffering from multibillion-peso hit following travel bans imposed by the National Government in an effort to control the virus outbreak.

Cebu Pacific, which is down 8.8% since the new year commenced, declined 1.7% on Wednesday.

Philippine President Rodrigo Duterte has repeatedly expressed hopes that medical experts will immediately find a cure for COVID-19 as it continues to inflict deeper damage not only on the local economy but on the world economy as well.

The government is taking necessary initiatives to recover lost revenues and cushion the impact of the virus. 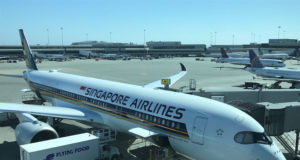 Merry Gel Sigui - March 24, 2020
0
A total of 185 out of 196 aircrafts of the Singapore Airlines (SIA) will be grounded amid the intensified border controls worldwide...