As it strives to fund its weapons programme, North Korea
has stolen a total amount of $1.6bn ($AU2.4bn) through cyber-attacks targeting crypto-forex exchanges and banks.

In the report received by the United Nation’s Security Council’s North Korea
sanctions committee, there were around 35 cyber-attacks using developed
malware and programs designed to siphon foreign resources from international
financial institutions and channel them to untraceable accounts and
jurisdictions that have less stringent government rules and regulations over
the usual banking practices.

Financial consultants are also investigating North Korea’s
illegal ship-to-ship transfers in violation of UN sanctions. All of these funds
were used to proliferate North Korea’s nuclear program. Two missiles were
launched last Tuesday by the North and another one is scheduled in less than
two weeks.

North Korean leader Kim Jong-un met with US President Donald
Trump in Singapore last year and promised he would stop the nuclear program. He
also agreed that the launch of intercontinental ballistic missiles will be stopped.

But the second summit in 2019 ended up with no agreement on
both sides. So far, denuclearisation talks are at a dead end but both leaders
are still open to diplomacy.

North Korea was slapped with UN sanctions since 2006 that
restricts exports such as iron, lead textiles, coal, and even seafood and limits the importation of purified petroleum products as well as crude oil.

The US State Department issued a statement in the reaction of
the UN report saying that they urge responsible states to take necessary actions to
counter North Korea’s ability to conduct hostile cyber activities, involving the unlawful WMD and ballistic missile programmes. 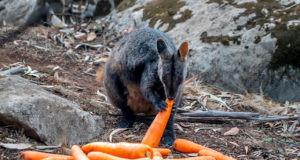 Merry Gel Sigui - January 14, 2020
0
The month-long bushfires in Australia have created an adverse impact on the wildlife, with millions of animals killed and habitats destroyed.With this,...