Japanese gaming giant Nintendo has confirmed feeling the heat of the novel coronavirus as it disrupts the production and deliveries of some of its products.

In a social media post, Nintendo said that due to the fast spreading deadly infection, “it is expected that production and shipment delays will be inevitable for peripheral devices such as the Nintendo Switch and Joy-Con manufactured in China for the Japanese domestic market.”

Reports said that most Switch consoles are manufactured by multinational electronics company Foxconn, which factories in China remains closed for at least another week due to nCov.

The firm added that there might also be delays in the deliveries of the Ring Fit Adventure game which are out of stock at the moment.

In an interview with CNBC, Niko Partners’ analyst Daniel Ahmad contested that even if Nintendo only warned about postponements in Japan, it could also become a market problem in other countries like the United States.

Ahmad furthered that, aside from games, the virus will more likely impact the entire supply chain of manufactured goods as China plays a huge role in the production of game hardware, phones and other electronic gears.

“When looking at games’ consoles specifically, we note that 96% of video game consoles imported into the U.S. in 2018 were produced in China. Whilst companies such as Nintendo have moved some manufacturing abroad, China still accounts for the majority,” added the senior analyst of a games market research firm.

Nintendo, in its advisory, has apologized for the trouble and promised to keep on monitoring the crisis situation.

“We will work hard to deliver the product as soon as possible, while keeping an eye on the effects of the new coronavirus infection, and we look forward to your understanding.” 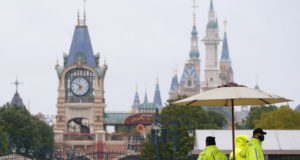 Disney shuts tourism businesses in response to the coronavirus

Merry Gel Sigui - March 16, 2020
0
The Walt Disney Company has now closed all its eleven Disney theme parks across Asia, Europe and North America as a precaution due...