The demand for mobile games has surged as millions of people in China are quarantined and stuck indoors amid fears of the spreading coronavirus that has now claimed more than 3,000 lives.

Application analysts reported that the global mobile game downloads jumped to 39% for the month of February.

The mainland accounted for a huge portion of this increase and its average weekly game downloads rose to 80% in the first three weeks of the said month.

Jeff Cohen, an analyst at Stephens Inc., said: “Gaming has been one of the main beneficiaries in terms of increased time spent due to quarantine.”

Observers say that the online entertainment and gaming sector has underlined outperformance of their shares despite the current market swoon caused by the Coronavirus Disease 2019 (COVID-19).

“However, user penetration and consumption activities in this area are relatively mature and thus debatable if it has any long-lasting impact on earnings and stock prices,” said Columbia Threadneedle’s portfolio managers Dara White and Derek Lin.

The rise in game-playing demands began as early as January when the Chinese government implemented lockdowns and extended the Chinese New Year holidays in efforts to contain the virus outbreak, thus, limited the entertainment options in the world’s most populous country. 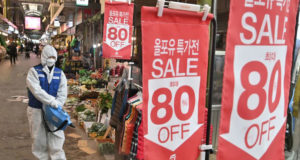 Merry Gel Sigui - February 25, 2020
0
From only 31 cases on February 18, South Korea has confirmed a sudden increase in its coronavirus cases that reached 833 as...