“Previously, we did receive intelligence that he was active in Wuhan,” said Inspector-General of Police Abdul Hamid Bador.

Malaysian police are now on the lookout for his return amid the COVID-19 outbreak although it was not confirmed if he was able to leave China before the implementation of the lockdown that began in January.

Abdul Hamid said that he has also instructed the country’s main international airport to strictly observe the arriving passengers as Low may possibly move back home as the virus spreads.

“I have told Kuala Lumpur International Airport to monitor if he comes back with Covid-19… because our health facilities are the best … We will give him the best treatment,” the Inspector-General jokingly said.

The authorities earlier reported that Low was in a jurisdiction with which Malaysia has an extradition treaty. They have also promised to bring back the notorious businessman before 2019 ends.

Malaysia has recently sought help from Interpol to track down Low for him to face criminal charges for allegedly masterminding the 1MDB scandal.

Low first made headlines in 2015 when former Malaysian Prime Minister Najib Razak was accused of channeling RM2.67 billion (US$700 million) from the government-run strategic development company to his personal accounts. 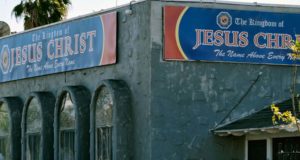 3 Filipino church leaders accused of fraud and trafficking in US