The Indian Space Research Organization (ISRO) stole the limelight in the technology sector this week as it unveiled its first half-humanoid robot that is intended to travel space in December.

Claimed to have the ability to operate as a companion, the robot was named Vyom Mitra which translates from two Sanskrit words— Vyom means Sky or Heaven and Mitra means friend.

Scientists said the robot will be initially sent to space this year as part of ISRO’s unmanned mission.

The robot is designed to perform several functions including the ability to operate switch panels to control the capsule, conduct life support operations and respond to astronauts’ queries.

Vyom is bilingual and its semi-anthropomorphic nature allows it to provide valuable data and tips to astronauts based on its experience in the first unmanned mission.

According to reports, the Indian invention is not the first robot with human-like structure or abilities to advance toward space.

Russia’s Skybot earlier made its way to ISS while NASA, on the other hand, is trying spheroid robots called “Astrobee” that are projected to help space explorers. 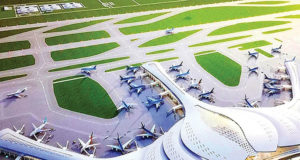 Merry Gel Sigui - March 27, 2020
0
The Vietnamese government plans to speed up the disbursement and site clearance processes in order to commence the first construction phase of...