With numerous major global markets closed for Christmas, the equity markets across the globe mostly slipped in a subdued trading held few hours before the 25th.

Asian markets were slightly changed as Japan’s Nikkei (NIK) slipped 0.2%, Taiwan’s Taiex finished flat and the Shanghai Composite (SHCOMP) was about flat with -0.03%.

U.S. stocks closed mixed; the comprehensive S&P 500 and the benchmark Dow slipped with tiny losses, and only the Nasdaq hit its ninth straight record close with a 0.1 percent gain.

In an interview, CMC Markets analyst David Madden said the financial markets have little instability and light trading volumes in true Christmas tradition as many investors are away to spend their Holidays.

The muted session concluded with some huge developments as Uber co-founder Travis Kalanick announced he would exit the ride-hailing company’s board this year; and embattled company Boeing fell 1.4 percent following the claims that new documents were submitted to the congressional committee for investigation of its response to two terminal smashes.

With regards to the trading schedule, U.S. markets have already reopened today but most European markets will stay closed until the 27th of December. 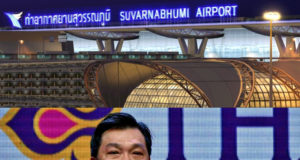 Merry Gel Sigui - March 15, 2020
0
The president of Thai Airways and the director of Suvarnabhumi International Airport have separately tendered their resignation letters on March 12 as...