Effective March 16, the Philippines’ largest island, Luzon, has been placed under “enhanced community quarantine” as the government grapples to contain the fast spreading new Coronavirus-Disease 2019 (COVID-19).

This came days after initially putting only Metro Manila on a quarantine on March 12.
Hence, more Filipinos are now confined at their homes with land, air and sea travels banned, small and big businesses shut, works in public and private sectors as well as classes in all levels suspended.

Many Filipinos have taken to social media to share their life experiences about these intensified measures. Panic, confusion and despair have been felt by millions who would have to live through month-long or even longer lockdown.

Mary Grace Rabulan from Tarlac province shared: “I, as a commuter, am also one of the affected in the millions of the country’s workers. No public bus, no public jeepneys, even a tricycle to ride on. I contacted my Uncle and asked him to give me a ride just to get into the office. When I got into the office, it was a regular day for me to work with the current task while 95% of the employees were packing their computers and bringing them to do work from home.”

A BPO worker in Clark struggled about going to and from his workplace since his hometown is over an hour away.

“Based on my experience for a person without an automobile it’s quite difficult, there are no public transportation at sight, if there is they will charge you a butt load of money for it,” Andrew Muhfield said.

An inter-agency task force was created to oversee the strict suspension of all public transports.

Elisha Rosal from Bulacan province shared how she was stopped by checkpoints while on her way to work and ended up going back to her house all the way from Pampanga.

“When we reached the border of Bulacan and Pampanga, there are police officers at the checkpoint saying, we should all get off because public transportation should be suspended. The driver just gave us back the fare. The officers were not even allowing the jeep to send us back, and instead advised us to ask a private vehicle or truck drivers to pick us up.”

But while others rant about strict checkpoints, police officers were quick to defend themselves on social media saying that they were tasked and ordered to render duty at Frontline Checking every citizen who pass through. They are appealing to citizens to just coordinate with them for everyone’s safety.

“We are not born brave but we vow, we oath and we sworn to serve the Filipino people even though we fear that our life will be our greatest sacrifice,” the shared post read
For the past days, groceries, supermarkets, malls and even convenience stores have been jampacked with shoppers eager to secure their share of essentials.

Media consultant Jinky Jorgio from Metro Manila said she got discouraged by the long lines at malls and some have had to wait had to wait in line for three hours
“I didn’t know how long it will take to queue. All I could do was panic, so I just went to the market to get sweet potatoes and bananas,” she said.

In my case, I had to rush to the grocery after work to get additional supplies of goods and basic necessities. I and my family have started buying items since last week but we had to ensure that we have adequate supply since the scenario due to the lockdown continues to get worse and people were panic buying.

Others complain about the spread of social media posts and text messages about false claims on coronavirus and the implemented lockdown, resulting to increased public anxiety.

“In the afternoon, we’ve panic from the “fake news” announcement saying that the Clark Development Corporation will close its gates and won’t let anyone go in and out even you were just an employee or not. Many of our relatives started worrying and some traveled into our office to fetch these employees,” said Web Developer Ronart Mananais.

Apparently, warnings have also circulated about some groups pretending to work for sanitization in homes.

“Please be careful and alert. Please alert all family and friends not to open the door to any person or group claiming to be in charge of any party to sanitize homes from the virus. These criminals have looted many houses with this deceptive method.”

Misinformation has spread faster than the virus not only in the Philippines but globally, prompting social media companies like Facebook and Twitter to drastically remove misleading information from their platforms. 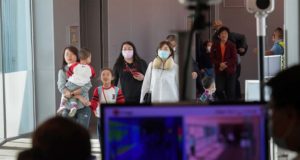 Merry Gel Sigui - February 4, 2020
0
The United States Government said China has not yet accepted the offer of assistance of Trump’s administration to combat the coronavirus.