The coronavirus death toll and diagnoses continue to increase daily, and experts say that this is fueled by China’s lack of control measures, suppression of information and political arrogance.

Xu Zhangrun, a prominent law professor in Beijing, blamed his county’s government for failure to control the nCov outbreak that has killed more people than SARS and World War I.

The scholar published an article criticizing the Communist Party leaders for putting politics ahead of the safety of their constituency.

“The political system has collapsed under the tyranny, and a governance system [made up] of bureaucrats, which has taken [the party] more than 30 years to build has floundered,” he said in a reference to how the new officials sought to rebuild the country and shift the government into collective leadership after the death of China’s former Chairman Mao Zedong in 1976.

Xu was once dismissed from his teaching position for verbally attacking the government and now faces more punishment because of his recent article, according to a source.

Meanwhile, Chinese reporter Mimi Lau of the South China Morning Post earlier said that the shortage in test kits has been delaying diagnoses in most hospitals in Wuhan.

Several online posts also showed a number of patients packed in hallways while waiting for treatment and only those with severe symptoms were allowed to be tested due to the lack of supply.

Wuhan Municipal Health Commission also confirmed that it is striving to keep up with the fast-spreading virus which even infected and killed some medical workers.

USA Today wrote that “there’s still so much we don’t know” about the coronavirus considering China’s censorship of relevant information.

“Li Wenliang, the doctor who first spoke out about the need for urgent action and shared his observations with medical associates, was formally reprimanded for rumor-mongering, likely resulting in a delay of weeks before the problem was taken seriously,” the article read.

Chinese police have also punished medical staffs who shared details about the situation in their areas about the deadly outbreak. 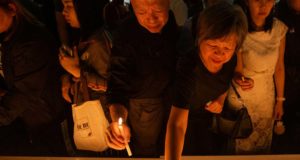 Merry Gel Sigui - February 11, 2020
0
Thousands of Thais attended a vigil on Sunday for the 29 people who were shot dead by a rogue soldier over the...