The Chinese government on January 1 launched its new Foreign Investment Law (FIL) which allows it to further open its market and equalized the treatment for foreign businesses competing with local private firms and state-owned enterprises.

Ting Lu, the Managing Director and Chief China Economist, said the landmark legislation is very exciting and beneficial as it will lessen barriers for financial firms, thus, open a number of opportunities.

“Previously, manufacturing companies have access to China. But for financial service companies, there are a lot of barriers. Now, the Chinese government promised to take away most of these barriers in the next few years,” he furthered.

FIL, aside from its twofold aims, also seeks to improve the ease of doing business across all its regions that have been affected by the rising competition in ASEAN countries.

The law also replaces 3 older laws and now gears to allow foreign investors to create business in China without being obliged to tie with local businessmen.

But some foreign firms tend to be wary on the law, with their expectations now set high, as they have long been dismayed with China’s forbidden promises.

“Our expectations are quite modest…The longest-standing issues in China do not concern an absence of legislation, but rather the lack of enforcement and the breadth of government discretion resulting in selective enforcement,” said Lester Ross, the Head of American Chamber of Commerce in China.

Analysts said that despite others’ positive claims on the FIL, it still excludes foreign investors from several sectors like healthcare and publishing.

They added that the new law leaves numerous loopholes and lacks specific enforceable set of rules including what penalties would be forced for violating intellectual property rights.

In line, economist Lu called for better protection for Intellectual Property (IP) to sustain the world’s second largest economy as a home to advanced developments.

“China is big and the growth rate is still around six percent. This is still the fastest-growing economy in the world. And the economy is just so big that it will have a lot of business opportunities,” he stressed.

The new FIL is said to be fast-tracked by Chinese lawmakers as it was passed only three months after being taken back onto their agenda while some legislations actually take years in the process. 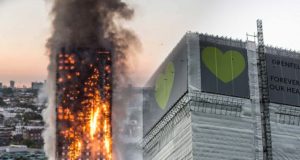 Contractors to face charges over refurbishment of England’s Grenfell Tower

Merry Gel Sigui - February 13, 2020
0
Several contractors and executives who are involved in the refurbishment of Grenfell Tower in London are scheduled to appear in court for possible...