“The cost to the global economy can be quite staggering in negative GDP terms if this outbreak reaches epidemic proportions.”

Innes furthered that the coronavirus could upset airline industries and local tourism. In Hong Kong, both flagship airline Cathay Pacific and casino operator Wynn Macau have reported a loss of more than four percent.

According to reports, analysts and strategists fear that the new coronavirus strain which was compared with the Severe Acute Respiratory Syndrome (SARS) that hit China and took the life of more than 600 people in 2002 and 2003, could also have the same adverse impacts in economic trades.

Most investors were reportedly spooked by the SARS-like virus that already killed 17 people in China (as of January 22) and affected hundreds of people from in and out of the world’s second largest economy, including an American who has recently traveled from China.

After this report, US markets were quickly lowered and most European stocks also followed losses. The prices of copper and oil were likewise pressured with a 1.8% and almost half percent down, respectively.

Russ Mould, the investment director of AJ Bell, attributed the downgrade stock markets to “reports the deadly virus has spread to neighboring countries, with all the potential economic disruption that could cause.”

For his part, Capital Economics senior economist Gareth Leather said that they are doing significant strides to meet the predictions about the economy but warned countries dependent on Chinese tourist spending to be the most affected if the virus continues to spread.

“For now, we are keeping our economic forecasts for this year unchanged, but the spread of the virus is clearly a major downside risk and we will continue to monitor the situation closely.” 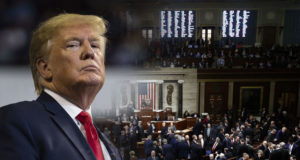 Merry Gel Sigui - December 19, 2019
0
In a last-ditch effort, outgoing Democrat congressmen voted to embarrass the United States of America and its people with the bogus impeachment...