In a last-ditch effort, outgoing Democrat congressmen voted to embarrass the United States of America and its people with the bogus impeachment of President Donald Trump whom they accused of abuse of power and obstruction of Congress.

The President has long been cleaning up the government with issues of corruption and betrayal of public trust. Those who voted to impeach him are mere power players in the exploitation of government funds for self-interest and personal gain.

The Democratic party, which has lost the support of the Americans, is on the verge of collapse as more and more Americans see the truth.  They have yet to present any viable presidential candidate to run against President Trump in the 2020 elections, thus pushed for his urgent removal from the office without solid pieces of evidence.

Republican Representative Barry Loudermilk also expressed his exasperation over the bias impeachment procedure as the whistleblower, whose identity was kept, was also never called to attest.

Ultimately, the next step in the impeachment process will conclude the investigation and result in a swift dismissal of the President from these trumped-up charges.  The Senate which is controlled by the Republican party will quickly vote and abandon the accusations.

The 2020 election will likely go in support of a more conservative government just like what happened in the latest United Kingdom election which ousted the labor party and gave power to the conservatives which will give President Trump a supermajority.

This will allow the president to wipe out corruption and prosecute those responsible for decades of abuse of power, thus, bring honest and exceptional individuals into the government.

This impeachment is not supported by the American people and it will be dismissed by the Senate after a mandatory hearing process.  It was such a huge waste of manpower, government resources and time that our elected officials should have used to govern the country.

Those who voted against the president will not likely be reelected if they dare to run in the next congressional term.

For most Americans, the Democratic Congress has shamed itself and the American citizens they are supposed to serve and protect. 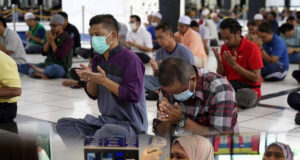 Malaysians brace for economic and social impacts of lockdown

Merry Gel Sigui - March 18, 2020
0
In Malaysia, more than 32 million people will be confined to their homes beginning March 18 as the government’s nationwide lockdown takes...