The popular weather predicting app Dark Sky announced in a blog post on Tuesday that it has been acquired by Apple, noting that it will now “reach far more people, with far more impact.”

“Our goal has always been to provide the world with the best weather information possible, to help as many people as we can stay dry and safe, and to do so in a way that respects your privacy…There is no better place to accomplish these goals than at Apple,” the post reads.

But while it seems a fine weather for the two newly-merged companies, many android users poured their sadness about this decision since Dark Sky will soon no longer be available for them to download.

Dark Sky is a beloved app for its clean interface, hyper-local and detailed weather details and ability to forecast every minute.

The app’s creator Adam Grossman also explained in the post that service to existing users and subscribers will last until July 1 this year, “at which point the app will be shut down.” All subscribers who still have active subscription of Dark Sky at that time will be entitled to a refund.

Dark Sky’s API, or the software that conveys information between the app and its users, will still function for the existing customers until next year. However, the company will no longer accept sign-ups for new subscribers.

It was also noted that Dark Sky, which is now listed as “Apple” in the App Store, will already be subject to the tech giant’s privacy policy.

Apple users, for their part, have nothing to worry because there remains no changes at this time. The Dark Sky app is available in the United States at $3.99 and at ‎£3.99 in the United Kingdom. 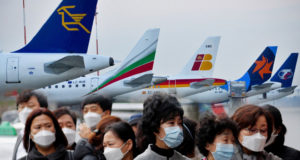 Merry Gel Sigui - March 9, 2020
0
The International Air Transport Association (IATA) has announced a dramatic increase in the damage of the coronavirus to the global airline industry.